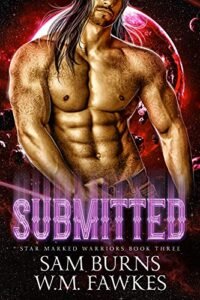 An alien bastard, a man without a home, and a war to end an entire planet…

Beau: I never had a place to belong. The only gay kid in my small town on the shores of the southern Mississippi River, I’ve spent my life hiding who I am. And the night I came out of the closet? Yeah, my dad kicked me out of his house. But there’s not belonging, and then there’s being kidnapped and whisked off the flipping planet and hanging out with huge, intimidating extraterrestrials.

Okay, given that I’ve been caged by a bunch of big blue aliens, I guess “hanging out” is an overstatement, but at least they’re feeding me. We get to an entirely new planet, and these warriors have more in mind for me than I’m prepared to give. Only, there’s one surly alien warrior who’ll put his life on the line to save mine.

Vorian: Son of Crux the Progenitor, self-proclaimed savior of Thorzan, I have spent my life outcast from Thorzi society, watching my princely half-brother Kaelum from the shadows. Hated by my human mother and a hybrid myself, the Thorzi see me as soft and weak. My father expects me to mate with one of our own kind, but I see my own weaknesses, hopes, and angers in the form of one beautiful human, trapped in one of my father’s cages.

To save him from the fate my father has in store, I’ll have to betray everything I’ve ever known, but I may need help from my people. And whether they know it or not, they’ll need Beau and me to survive the conflict with our greatest enemies.

By popular cowriting duo Sam Burns & W.M. Fawkes, Submitted is an M/M alien romance with a hybrid warrior who’s spent his life as an outsider, a homeless young man who’ll find a place to belong on a planet he never dreamed of, and a battle for all of Thorzan in the hands of a special bonded mate pair. This book is third in the Star Marked Warriors series. Please see content warnings on the copyright page.