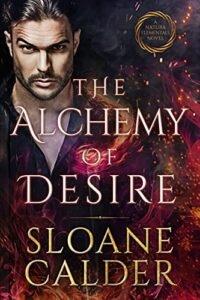 The Alchemy of Desire

The wickedest of warlocks. The noblest of Naturas. A sensual bargain built on lies. And a love that won’t be denied.

Flora Lennox is in love with the enemy. A man who sees her as a means to an end. A man she should despise. A man she should want to destroy—until he gives her the very thing she’s always desired and will do anything to keep.

Samael Byrne’s search for his wife ended in soul-searing tragedy—finding her dead in his driveway. Now, he’s turned his back on his coven, his family, his beliefs. And he’s fallen in love with the very thing he hates—Natura power, and the woman who gave it to him: Flora Lennox.

But with their world on the brink of a supernatural showdown, can Flora and Samael risk their troubled hearts to bridge centuries of distrust between two bitter enemies before pride and the relentless pursuit of power destroys them all?

For fans of classic paranormal romance series like Black Dagger Brotherhood, Immortals After Dark, and Psy/Changeling… with deep characters, intense relationships, and kickass action… oh, and hot sex… Dive into the Natura Elementals series…supernatural mafia romance at its hottest!

**Each book in this sexy-as-sin paranormal mafia series is a standalone romance, but to follow the family dynamics and understand this riveting supernatural world, start at the beginning with book 1, The Call of Fire.**