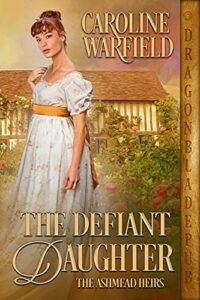 Madelyn assumed marriage as an old man’s ornament would be better than life with her abusive mother. She was wrong.

Now the widowed Duchess of Glenmoor, she wrestles with ugly memories and cultivates a simple life. She is content. At least, she was until her half-brother returned to Ashmead bringing a friend with knowing eyes and coal black hair to capture her thoughts.

Colonel Brynn Morgan’s days as an engineer in his father’s coal mines in Wales are long behind him. With peace come at last and Napoleon gone, he makes a life for himself analyzing the reports about military and naval facilities worldwide for a shadowy government department. What income he has is committed elsewhere. He has nothing to offer a wife, much less a dowager duchess.

More lies between the duchess and the man she wants than money and class. They have personal demons to slay.