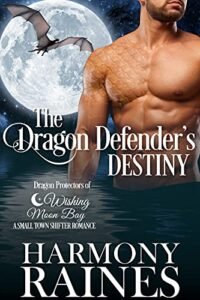 Working for the Wishing Moon Bay police department is nothing if not interesting. Especially when your mom is dating the chief of police. Or was… But that’s another story.

When Luna is sent to investigate an assault and robbery, she’s surprised to find the chief suspect is a dragon shifter.

She’s even more surprised when the dragon shifter she tackles to the ground says he’s not the criminal she’s looking for. But he is her mate.

Two dragon shifters in one day? Can she trust Egan when he says he isn’t responsible for the crime but he’s willing to help her solve it?

Egan flies to Wishing Moon Bay to clear his head. After a couple of weeks involved in council meetings, he knows politics is not for him. But when he meets his mate, he soon realizes walking away is not going to be easy.

But maybe there’s a new role for him. One where he can help his people and be with his mate.