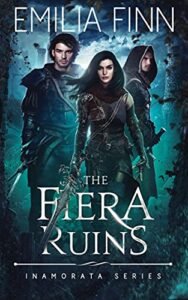 They expect me to choose between my inamorata, and my duty to my people.

Born a Lumea princess, not only was I taught to rule with grace and kindness, but also to front an elite army for a war that began more than four hundred years before my existence.

When the time came, I fearlessly led my soldiers into battle, but when we emerged on the other side of the deadly forest, I realised not all was as I’d been told.

Not only wasn’t Malachai Noble my enemy, but destiny has placed us together and declared us inamorata.

Together, we’re prepared to bring peace upon our world and rule with love and honor. But there are some who would prefer our silence, and they’ll stop at nothing to bury the truth.

Staying alive has become a full time job for this incoming queen, and Roman DeLuca’s declarations that I’m better off dead, than to choose wrong, means our enemies may be closer than I’m ready to admit.