23SeptRelease Day27The Love and Lust Series by Cassandra CrippsState Trooper Lacy Greene's youthful, gothic appearance makes her perfect for an undercover operation inside a local high school infested with drug dealers and gangs. But what she doesn't expect is to be attracted to a sexy gym teacher who has no idea who she really is.Choose Genre:Romantic SuspenseChoose Kindle Unlimited:NoChoose Trope:Student Teacher Standalone or Series: Complete Series Read more 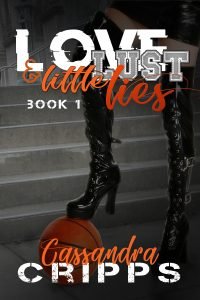 State Trooper Lacy Greene’s youthful, gothic appearance makes her perfect for an undercover operation inside a local high school infested with drug dealers and gangs. But what she doesn’t expect is to be attracted to a sexy gym teacher who has no idea who she really is.
Damien Aolani has never been tempted by a student before—in fact, it pisses off his usually controlled manner whenever anyone breaks a student’s trust or innocence. So, what is it about his new student Lacy that has her consuming every second of his thoughts?
Sparks fly, but lies keep them apart. If the truth comes out, will it bring them together? Or destroy what could have been?

She was my student.
I should have stayed away.
I tried to stay away from her.
Tried to fight my feelings.
A lot of fucking good that did.
Now, I might have lost her…
For good.

Posing as a deviant student was not supposed to be this difficult. When Detective Lacy Greene signed up for an undercover operation in Fort Wayne, Indiana posing as a drug-selling high school kid, she never imagined her life would spiral so far beyond her control. Within a matter of months, she secretly helped eliminate the main drug pipeline for the city. Next, came the arrest of all the members of 806, a notoriously violent gang. Then, life interrupted in the form of her a sexy high school teacher, Damien Aolani. After he broke her cover, they found themselves unable to withstand their attraction. Covertly dating her teacher added one more thing to her list of secrets to keep.

In a twist of fate, Lacy finds her emancipation revoked and placed on probation, forced to live with her new foster parent and teacher, Damien. Yet, their steamy bliss is threatened almost as soon as it starts. As Lacy embarks on a new mission to stop another gang, dangers increase and multiple love triangles emerge, pushing Lacy and Damien to their extremes. Can their secret relationship hold when their loyalty to each other is tested?