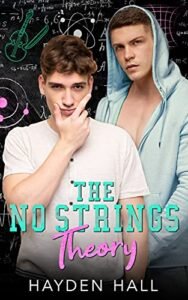 The No Strings Theory

I keep falling for Dallas, and it’s not just gravity’s fault.

The scrawny kid I once knew is gone, replaced by a nerdy, curious young man who crawls deep under my skin. The moment he enters my life, he disrupts everything.

There are so many other college guys to keep me distracted.

Yet I can’t get him out of my head.

I shouldn’t want my best friend’s little brother. But I’ve never been great at resisting temptation.

What starts as messing around in secret, soon becomes a lot more serious. I’m gambling my friendship and risking more than I should. But I’m falling, and I’m falling hard.

I’ve had a crush on Dallas since I was old enough to crush. He’s my oldest fantasy; my only fantasy. He’s also an obnoxious, insufferable, smug jock with the stupidest adorable dimples and a gorgeous… Uh… Where was I?

Oh right, he never noticed me except when I was the punchline of his jokes.

He’s also the very definition of a guy I shouldn’t want. Just ask my big brother; he warned me time and time again not to look up to Dallas. He’d lose his mind if he only knew the things Dallas and I did when the lights were out.

But Dallas and I have an agreement: no strings attached. That way, we get to have fun and nobody needs to know. I get to live out my fantasies, to get them out of my system. No harm done, right?

Yeah. I was dumb enough to think my crush on him wouldn’t come back to life. It’s not gravity that’s pulling me in.
Now I’m falling for him faster and harder than ever despite knowing what’s at stake.

The only way this ends is with a lost friendship and a broken heart.

The No Strings Theory is the fourth book in College Boys of New Haven series but it can be read on its own. It is a full-length story featuring best friend’s younger brother, forbidden love, nerd/jock relationship, close proximity, and the happiest of endings. Sink your teeth into this sweet and steamy romance.