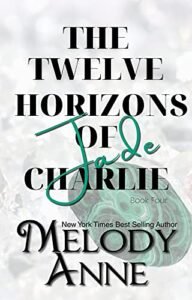 The Twelve Horizons of Charlie - Jade

Save this book
Genre: Women's Fiction

Charlie leaves New Orleans and doesn’t last long back home in Oregon before Stephy finds a new adventure for her. This time, though, it’s all different. This time her best friend is coming along with her as the two of them fly across the world to land in Italy for a new adventure and a new way for Charlie to find herself.

Italy is different for Charlie. She’s determined to not have another relationship, but the fates seem to have other plans. But instead of it only affecting her and one other person, this time there’s an entire family involved. What has she gotten herself into this time?

When Charlie’s world falls out from beneath her, a deathbed promise, and a loving best friend, sends Charlie on a whirlwind to find herself and live the dreams she promised Bentley she’d live.

Come join Charlie as she races around the world to live the dreams of her, Bentley, and Stephanie as she becomes a new person with each new location she comes to until she finds who she was always meant to be.Continue the journey of Charlie and Stephy and an adventure that keeps us guessing as to what’s going to happen next.