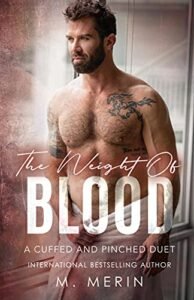 The Weight of Blood

Luck will only get you so far.

As a child, I was lucky the day Roman Prescott invited me over for dinner – and more so when his family opened their home to me, nearly raising me as one of their own.
At the end of the day, I really only understood one way of life, and as much as it hurt, I made a clean break of things.

I’m Vince Dalton: a hitman, con man, and thief. Except, I didn’t commit the murder that just bought me a life sentence.

I respect my old friend and all he stands for, but I’ve met the love of my life and there’s not a force on Earth that’ll stop me from growing old with Cassie.

But such is the weight of blood.

**This is the extended version of a short story found in TNTNYC’s Cuffed & Pinched Anthologies and the counter story to Kristine Allen’s The Weight of Honor.