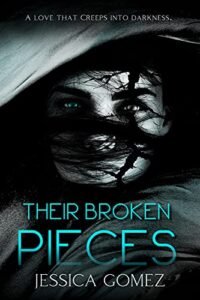 An unthinkable loss, devastating consequences and the two people that were left behind.

Two years ago, a horrible accident claimed too many lives. Jasmine lost her father, her twin brother, and her best friend in a matter of moments. She had survived, but that didn’t mean she was living. Instead, she suffered the brunt of her mother’s blame and abuse on a daily basis.

When Alex lost his best friend, his father and his sister, nothing could ease the pain. He found himself joining a gang just to feel something, destroying what was left of his life in the process. Instead of seeking support from the only person who understood how he felt, Alex pushed Jasmine and her suffering aside.

When Alex and Jasmine are brought together for their senior year, they’re inexplicably drawn to each other. There is no more hiding, only revealing how broken they both are by the accident. For the first time, they seek comfort in each other, but Alex has a secret.

Although fate has brought them back together, his new life could tear them apart.

Will Alex and Jasmine be able to put the past behind them? Or will their new story suffer another devastating ending?

**Book 1 of 3. Each book the in the Broken Series is a Standalone and can be read separately. However, for the full enjoyment of the series, I highly recommend reading them in order. The series deals with some sensitive matters such as verbal/physical abuse, gang violence, foul language, and sexual content. Recommended for 18+
**Their Broken Pieces was previously published in 2014 as After the Before. The book has undergone a massive rewrite, but the underlying story remains the same.