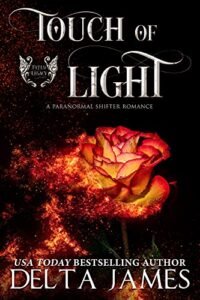 The Darkness has risen and has a new host in its grasp.

I have known Jed Steele my whole life. It isn’t until he sees me walking in the family vineyards in Tuscany that he decides I am his fated mate.

I have my life planned and it does not include a fated mate. A job offer in San Francisco combined with an invitation to visit New Orleans for a friend’s restaurant opening gives me the perfect excuse for leaving home. He can’t claim me if I am not here.

The trip was supposed to be something new and exciting. Instead it has turned into a nightmare. Evil was waiting for me and its powers are growing. Only a force greater than evil can stop what’s coming next.

An ancient evil on the rise. Will they be able to work together before the evil extinguishes the light?