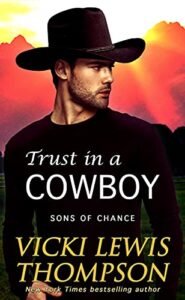 Trust in a Cowboy

Flirting with disaster…
City slicker Rafe Locke dreads making a fool of himself at the Last Chance Ranch, but wild horses couldn’t keep him from serving as his brother’s best man. If nobody expects him to rope and ride, he’ll be fine. But when maid of honor Meg Seymour invites him to join her in both activities, he’s tempted. She’s a knockout, but a fling with the bride’s best gal pal is asking for trouble.

Rafe’s locked-down attitude presents an irresistible challenge to Meg and she’s determined to loosen him up during the short time they have. After that, three time zones separate them. But as Rafe kicks over the traces and discovers his inner cowboy, Meg’s in danger of losing her heart.

Rafe’s already lost his. How can they say goodbye?

Saddle up for the Sons of Chance series! Steamy western romances from the NYT bestselling author who brought you The Buckskin Brotherhood of Apple Grove, Montana. If you like sexy cowboys, charming small towns, and laugh-out-loud adventures, you’ll love the residents of the Last Chance Ranch.

Note: This title was previously published as FEELS LIKE HOME