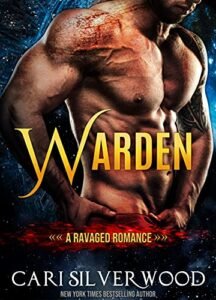 I am Isolde, female, and I’m a grocery store assistant who can shelve like a badass.
Until the day I’m scooped up by a lionlike alien called a mauleon, and he has CLAWS, and FANGS.
I should have fainted at those.

I find myself craving the touch of that mauleon, Gideon. I never asked to be an experiment, but we are mutating.

His muscles bulge with new growth. Silver streaks mar his skin. And he wants to write “mine” on me, with his claws, probably.

A galaxy-wide bureaucracy organized his mission, aiming to turn females into a new species, and no one knows why.

Why is love always so complicated?
And what is this heat…

This book contains unrestrained compulsions, lionlike aliens, orcs, #OrcsOnaBus, and adventures that go where no grocery store assistant has gone before.

This is a dark-ish romance but the evil Hero decided to be mostly nice, as well as a growling, dominant hunk, with claws.