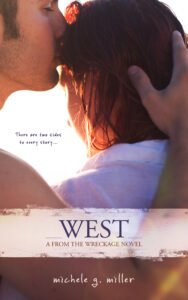 Series: From the Wreckage,

He crushed on her in middle school, but tragedy struck before he made a move. Four years later, can he win her heart when another tragedy throws them together?

“Jules’ parents thanked me for saving their daughter that night. Little do they know, their daughter is saving me with every word, every touch, every moment. Sometimes the things you thought you knew are completely wrong. For so long I thought I didn’t want anything to do with the West I was, then Friday night happened and now all I want is what I once had.”

For high school senior West Rutledge, surviving the storm is only the beginning. Four years ago, he closed himself off from his friends and his dreams, but in one night one girl makes him reconsider everything.

This is his side of their story.