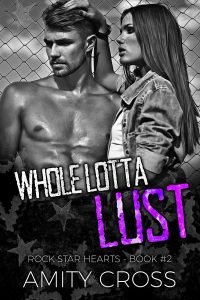 For the first time in her life, Juniper Rowe knows what it’s like to fall for a guy. After a string of tragedies, she’s given her heart to notorious bad boy rocker, Sebastian Hale. She’s all in, no matter the price his fame brings.

Juniper is Sebastian’s link between worlds. Taking her on tour was a way to keep her close, but his time is in high demand and things aren’t working out as well as he’d hoped. He’s determined to put his wild ways to bed and make things work, but his past won’t leave him alone. The same past that comes in the form of tall, leggy, pop star, Mallory Grigorio.

As time goes by, Juniper’s doubts begin to grow. She’s not sure she belongs on the road with a bunch of wild rock stars—and her boyfriend’s ex is a glamazon with razor sharp claws—but she’s determined to try. Sebastian’s worth it…isn’t he?
The lines between love and lust are blurred and when it comes to the crunch, dating a rock star might just be a whole lotta trouble.