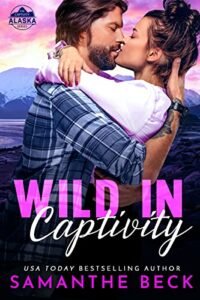 Save this book
Genre: Romantic Comedy

Ambitious L.A. lawyer Isabelle Marcano would rather run a mile in her Manolos than fly off to rustic Captivity, Alaska. But close the client’s sale successfully and her firm will find room on the letterhead for one more name. Still, taking a career detour to a place that doesn’t even have a Starbucks sounds like the seventh level of hell.

Then her best friend points out the town has something stronger on tap than caffeine. Testosterone. With two single men to every single woman, this assignment might just be the best thing to happen to her sex life since the invention of the waterproof Rabbit.

Until her sexy client introduces her as his fiancée to hide what she’s doing in town, and all her aspirations of hot Lumberjack Sex fly out the airplane window.

Though…fiancés do have sex, right? Those who don’t want to answer to small-town busybodies better look like they do, epically, even when the mere prospect plays havoc with her professional responsibilities. And her hormones.

Her firm’s getting antsy to finalize the merger. But the more she learns about Trace, about why he’s selling, the more conflicted she becomes about the deal. Failure to close means losing the partnership she’s always wanted, but the bigger failure might just be kissing Trace goodbye…