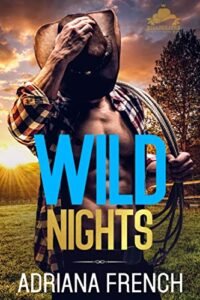 Billionaire Cowboy Cash Parker has been through the ringer. Now that he’s out of the Marines and found a new passion as an award-winning chef, nothing will stop him… Except the curvy bombshell he’s competing against.

Finger lickin’ good. That’s the first thing that comes to mind when I think of Katherine Miller.

I’ve been going to her family’s diner for their famous barbeque beef sandwiches for months… But as the executive chef of my chain of restaurants, I need to prove it takes more than money to be successful.

After I left the Marines, I lost my identity, and cooking saved me. Now I have the skills to show the world I know what I’m doing in the kitchen. But with Kitty here, competing against me in a cooking tent out in the middle of nowhere, how can I concentrate on recipes when she’s the most delicious dish I’ve ever seen?

Now, the producers have us shacked up in the same bunkhouse.

Oh, I still have an appetite to win alright, but the only prize I want to claim is Miss Finger Lickin’ Good.

Saddle up, Sugar. A new breed of cowboy-cavemen is here. They’re dirty and filthy rich. Cash is the next Parker brother to meet in the irresistibly naughty Billionaire Cowboys Gone Wild Series of standalone reads.