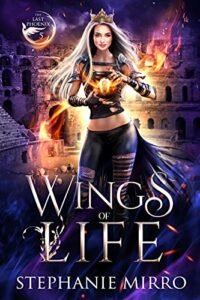 The queen is dead. Long live the queen.

Focusing on getting the kingdom back to normal after Galina’s false and terrible rule has turned out to be a monumental task. Especially because I can’t stop the nagging feeling in the back of my mind that I need to get back to Miami. Back to Thane.

Find your mate, Pavel said, but I’m running out of time.

I arrive just in time to stop Thane’s angelic ascension. Except now we’ve got to find some mystical item created by the dragons that no one has seen in centuries. Failure to do so means he’ll die a real and final death.

This journey will test us in ways we’ve never been tested before. I just hope we can both make it out alive. The odds aren’t looking so great for either of us, especially once the undeadget involved…

WINGS OF LIFE is the 5th book of 7 in The Last Phoenix series, an urban fantasy romance containing fast-paced action, snarky humor, portal travel, a variety of shifters, a hearty dose of swearing, and a healthy splash of steam.