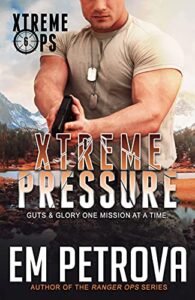 This special operative is her only chance. How can he refuse her?

After a major leg wound, Special Operative Chris Paxton is about to finally leave the facility where he’s been recovering. So when he wakes up with no clue where he’s at or who’s kidnapped him, things are about to get lethal.

Jersey has no choice but to find herself a bodyguard. Who better than a man sporting enough military tattoos to be his own platoon? She hopes this guy’s as badass as he looks because her family is out for blood—hers. Not only are they gunning for her, but the clock is ticking before more people die. With so much at stake, she doesn’t have time for Paxton’s cocky smiles or rough hands…so why does she keep giving in?

Saying no to Jersey’s cry for help isn’t an option, and Paxton’s locked and loaded for an all-out war against her big gang family. What neither of them are prepared for is the tight bond their steamy encounters create, leaving them far too aware that when it’s all over both of them have to walk away…and that bond will have to snap.

If a big man kidnapped by a woman half his size, passionate encounters and all the heart-pounding danger are your thing, 1-click XTREME PRESSURE! BINGE THE ENTIRE XTREME OPS SERIES TODAY!